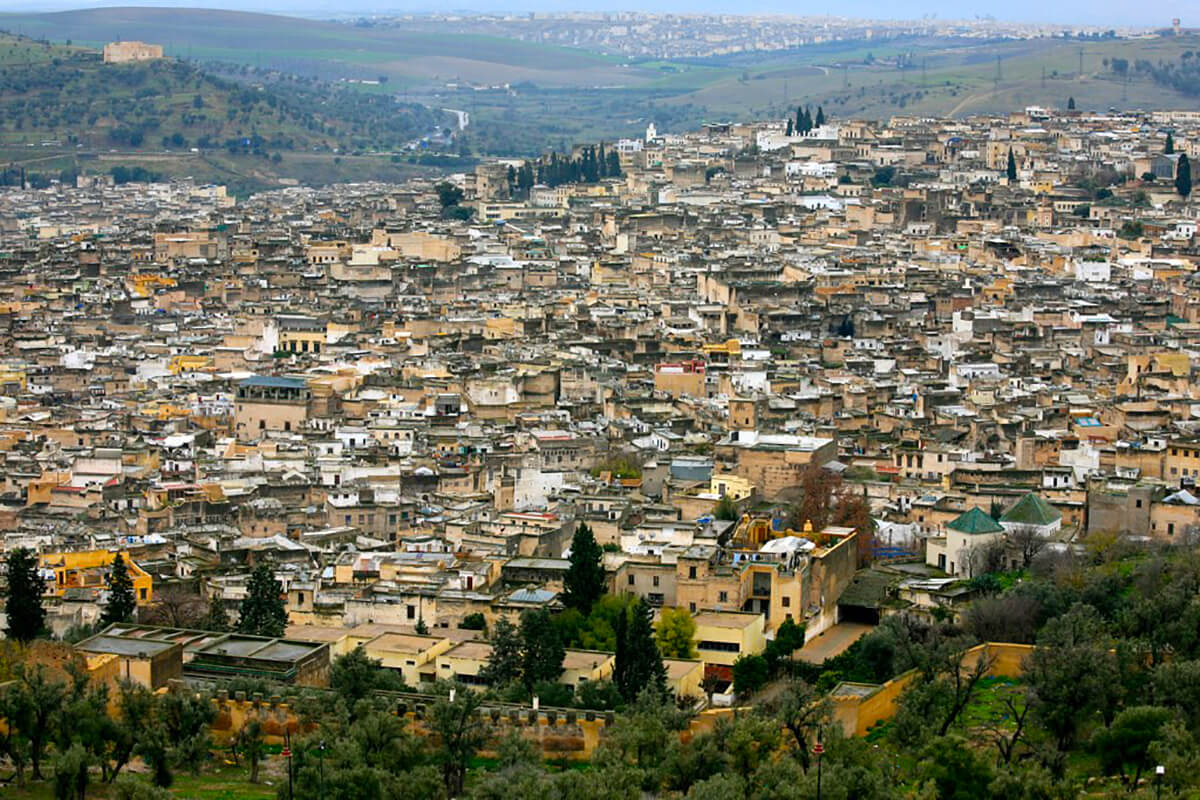 What to See and Do in Fez

Fez is Morocco’s spiritual, cultural, and historical capital that takes you back in time. Let yourself get lost in the world’s largest medina and enjoy multi-sensory experiences. With so many architectural treasures, this city is the best for sightseeing.

Fez is the second-largest city and the oldest of the four imperial cities of Morocco. Fez is was established during the 8th century and has the long-standing reputation of being the cultural, spiritual, and historical capital of Morocco. Famous for its handmade leather products and home to the legendary and photogenic Chouara Tannery.  Full of glorious fountains, exquisitely decorated medresas (educational institutions), and architectural wonders influenced by Islamic and Andalusian design, Fez captivates and intrigues. The vibrant culture of Morocco lies around every corner and Fez can easily be visited by booking a Morocco package tour that also includes Casablanca and Marrakech.

Get ready for an adventure as you enter the Fes-el-Bali Medina. Surrounded by ancient city walls that darken the labyrinth that runs through the old city. Browse souks that sell spices, perfumes, leather, metal lamps, musical instruments, and delicious foods. The medina is buzzing with workshops and studios where artisans still work with their hands to create authentic wares that make impressive souvenirs. Watch and learn more facts about Morocco culture. Donkeys and mules still rule the road transporting goods just as they did hundreds of years ago though you won’t find a camel tour here.

This is the largest car-free zone in any city in the world. The winding, nameless streets are extremely narrow for any cars to pass through and some streets are so narrow even pedestrians have difficulty. It’s easy to get lost in here so it’s best to just go with the flow and let adventure take over. Within the Medina are numerous historic mosques, the first and one of the oldest universities, University Quaraouiyine. The Fez Medina was recognized as a UNESCO World Heritage site in 1981. 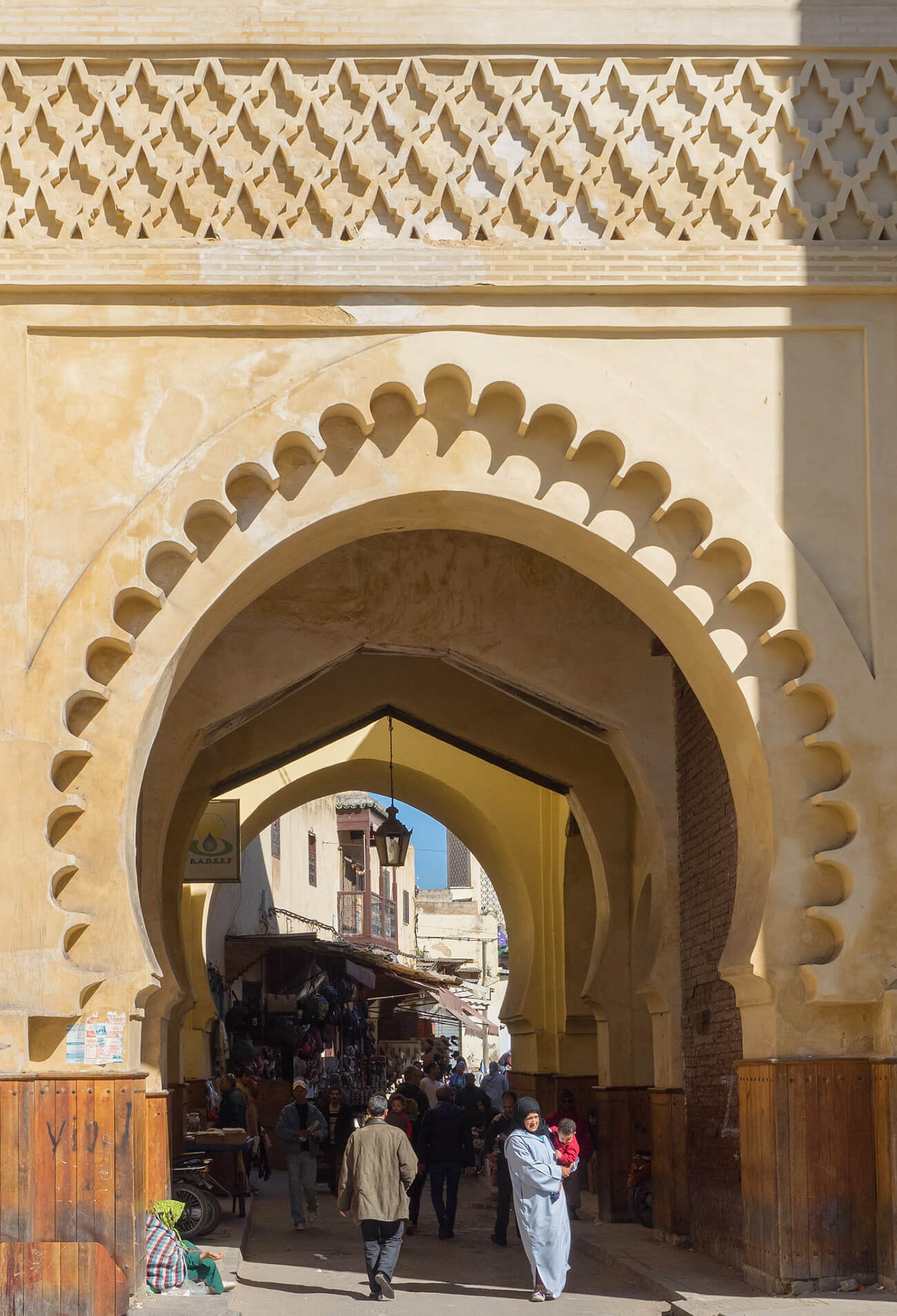 This historical tannery is a multi-colored sensory daydream and one of the largest and most iconic in all of Fez. An open-air studio with gigantic stone vats; some are filled with natural-colored dyes or a powerful concoction of cow urine, pigeon feces, salt, water, and quicklime.  The latter is meant for soaking and cleaning the animal skins of cow, camel, goat, and sheep. The smell is intense so it’s a good idea to bring along some fresh mint leaves to divert the strong odors.

The workers here carry out the same traditional process that has been used since Medieval times.  For an amazing view, wander up to a rooftop terrace, but keep in mind no view is free. You will be expected to pay at least a tip.  There are several leather shops around the area that sell a plethora of handmade goods like babouches, classic Moroccan slippers, handbags, wallets, and jackets.  Be prepared to haggle for the best price. All the leather crafts are truly unique souvenirs of Fez’s cultural heritage. 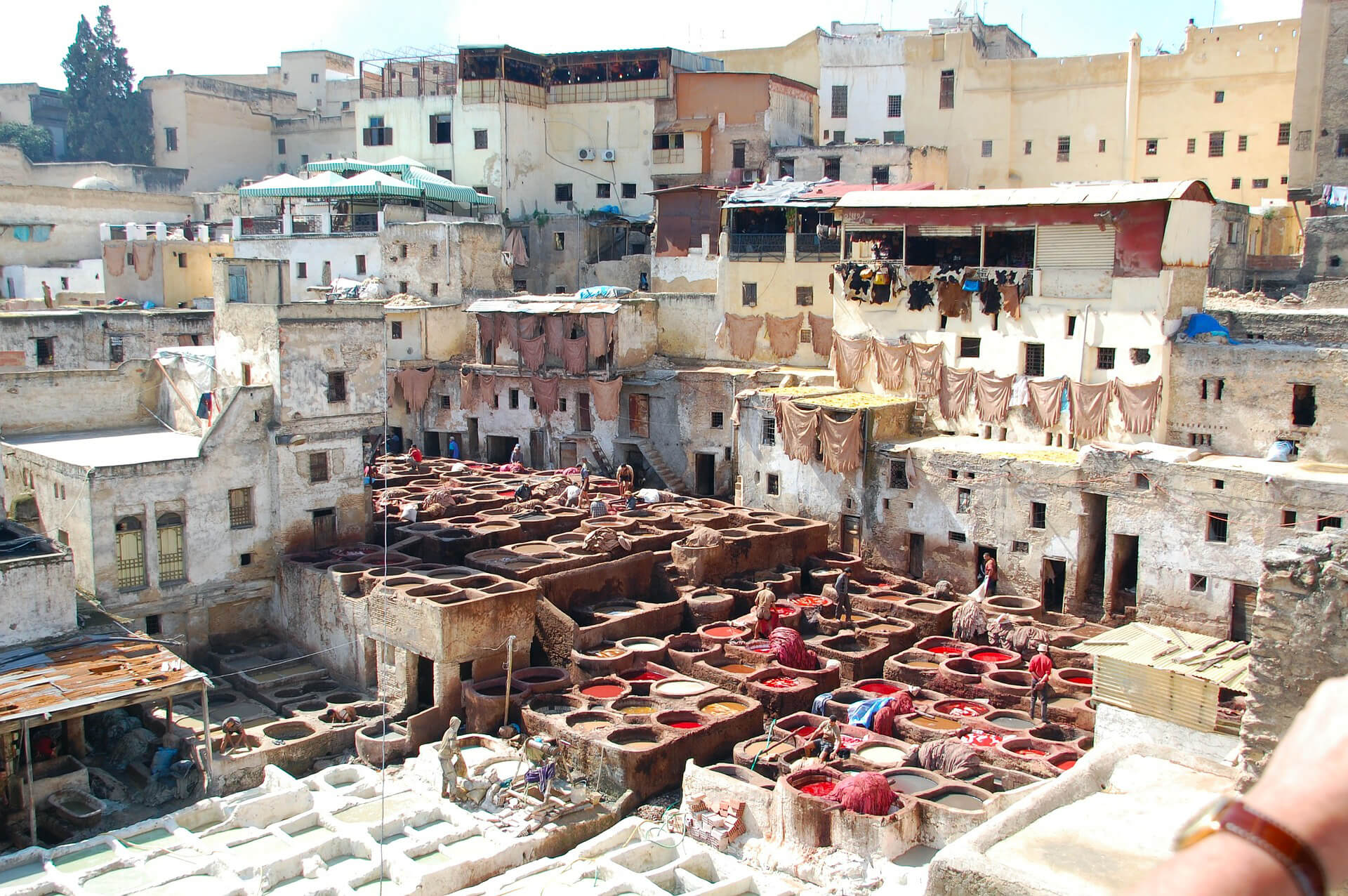 Built in the early 14th century during the Marinid Dynasty, this structure was commissioned by the Marinid Sultan Uthman 11 Abu Said and functioned as a public place dedicated to the teachings of Islam. A richly decorated courtyard with marble pillars, glazed zellige tiles that harmoniously form Islamic geometrical patterns, elaborate stuccowork, carved and painted wooden arches and hand-painted Arabic calligraphy. Al Attarine is sensational and its beauty is mind-blowing. 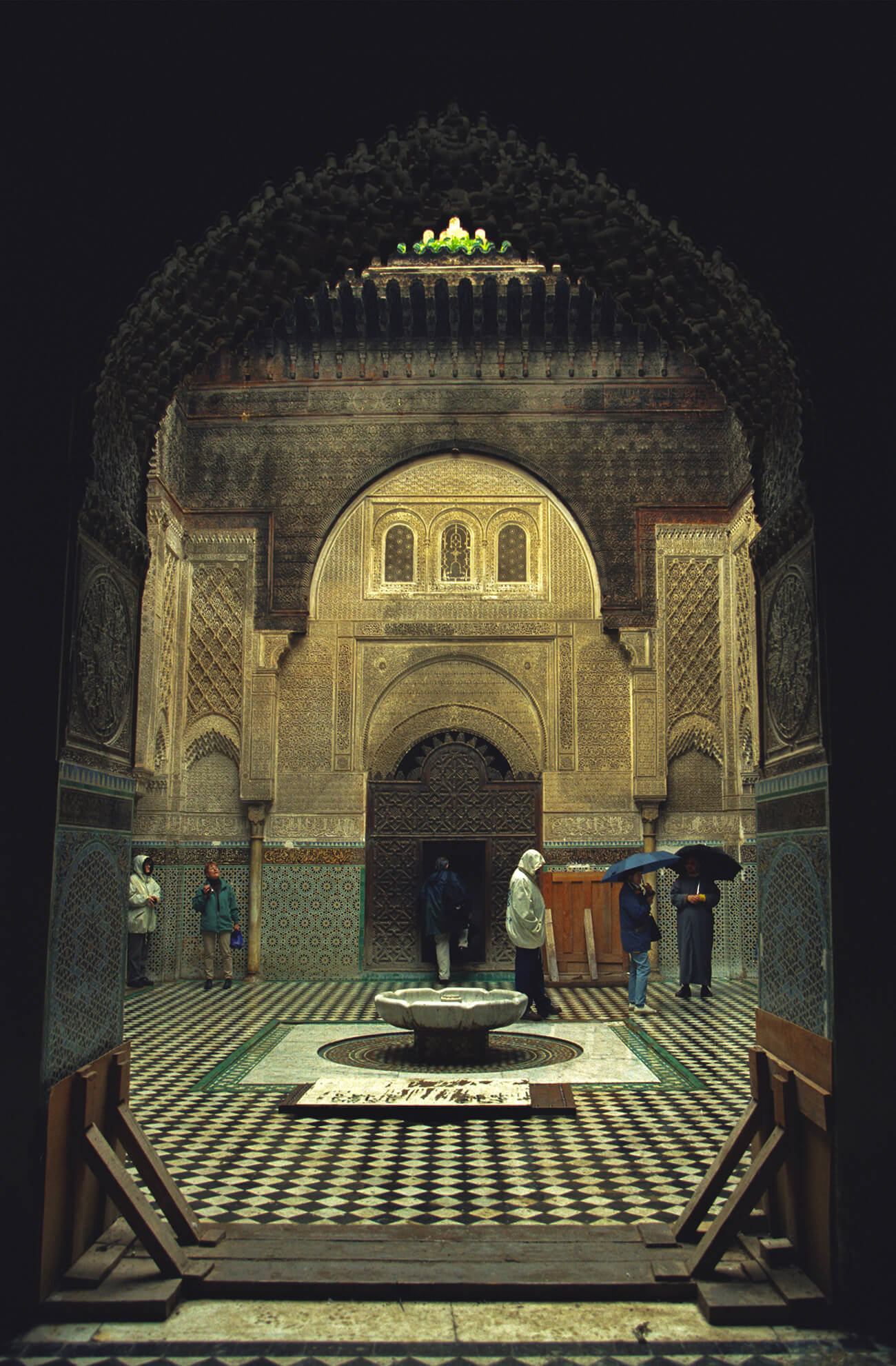 Just outside of Fez near the base of Jebel Zerhoun are the Ancient Roman ruins of Volubilis. Founded by the Amazigh/Berber centuries ago, this site was once the capital of Mauretania and later became part of the Roman Empire. This archeological site has been partially excavated and numerous artifacts have been recovered: mosaics, marble and bronze statues, coins, and various other cultural treasures. The Roman ruins are considered the most well-preserved in Morocco. Incredible mosaics are visible throughout the site and still retain their vibrance despite their age. Many of them were discovered in wealthy residencies and they generally depict scenes from daily life or mythology. Although this site is a popular tourist attraction, you might just have the entire place to yourself as it’s a somewhat desolate location.  Exploring Volubilis is an excellent way to experience history without the crowds. 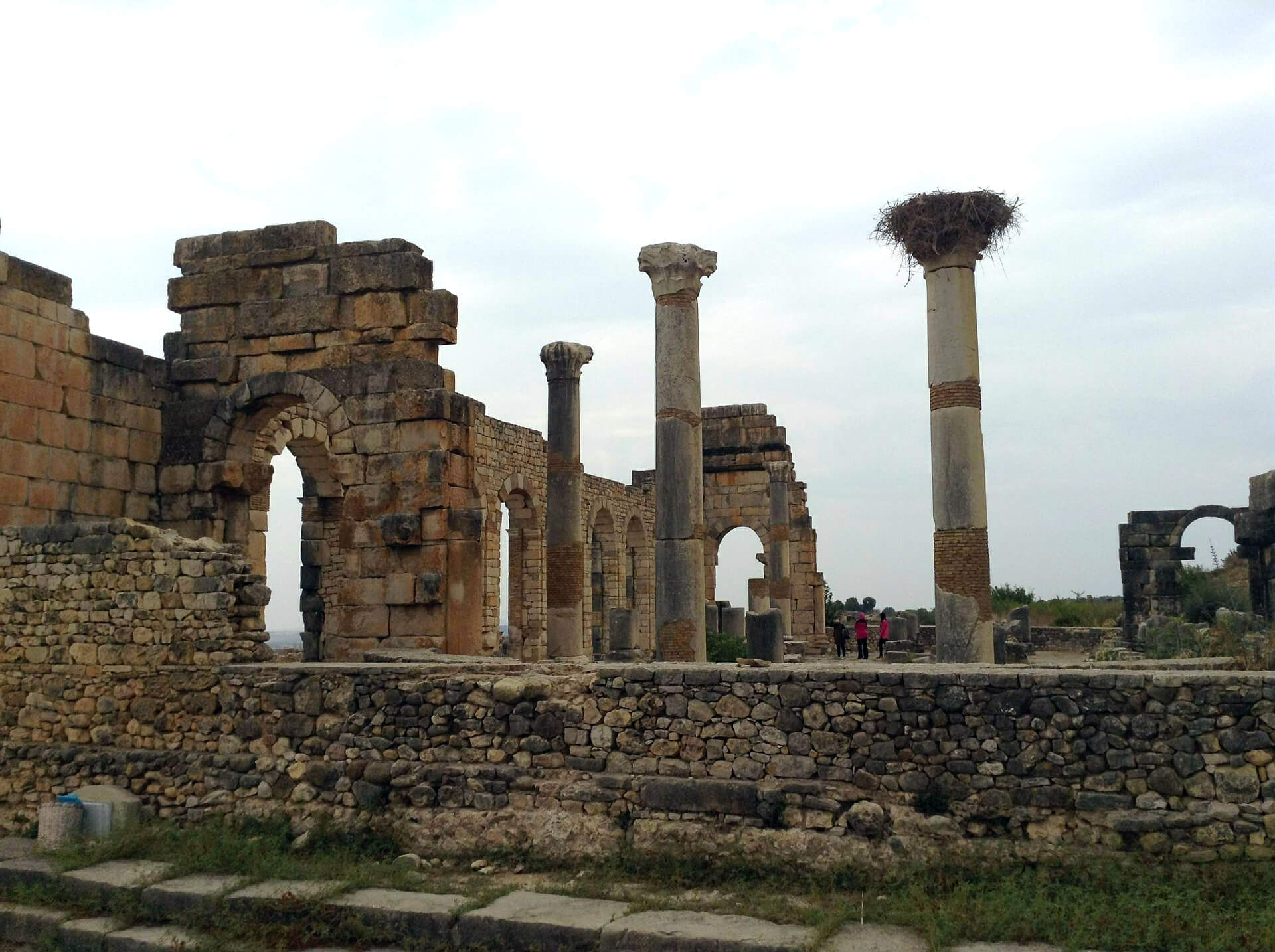 This iconic gateway leads into the old city of Fez medina. With its vibrant blue exterior, intricate fassi tilework (glazed terracotta tiles cut, engraved, and painted by hand) it’s a fantastic portal that will transport you back to the days of old.  Once you pass through the massive arch, you will rub elbows with donkeys and hear the clanking of metalworkers banging out new products. From the inside, remember to take a look back at the arch to see the interior of the gate is green to represent Islam. 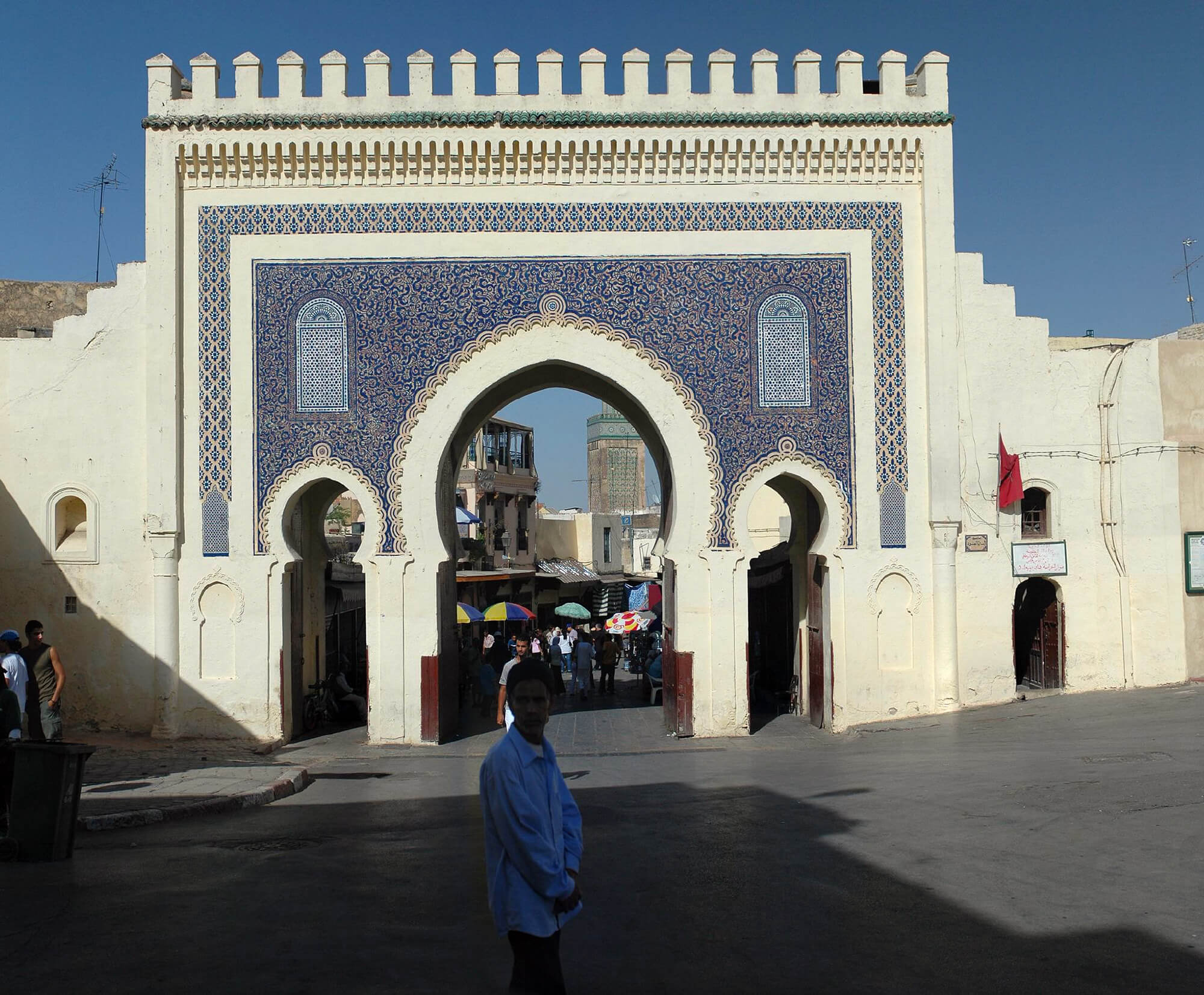 These colossal ruins of two mausoleums with massive arches rest upon a hill that rises high above Fez. Built during the Marinid Dynasty, who is buried here remains a mystery as very little is known about these structures. Although time and the elements have worn down the decorative facades and looters have stripped what they could take, not many remain. This site can be reached by foot or by taxi and the views from here are spectacular. The best time to visit is at sunset when you can watch the colors of the sky dance across the ancient city and the countryside. 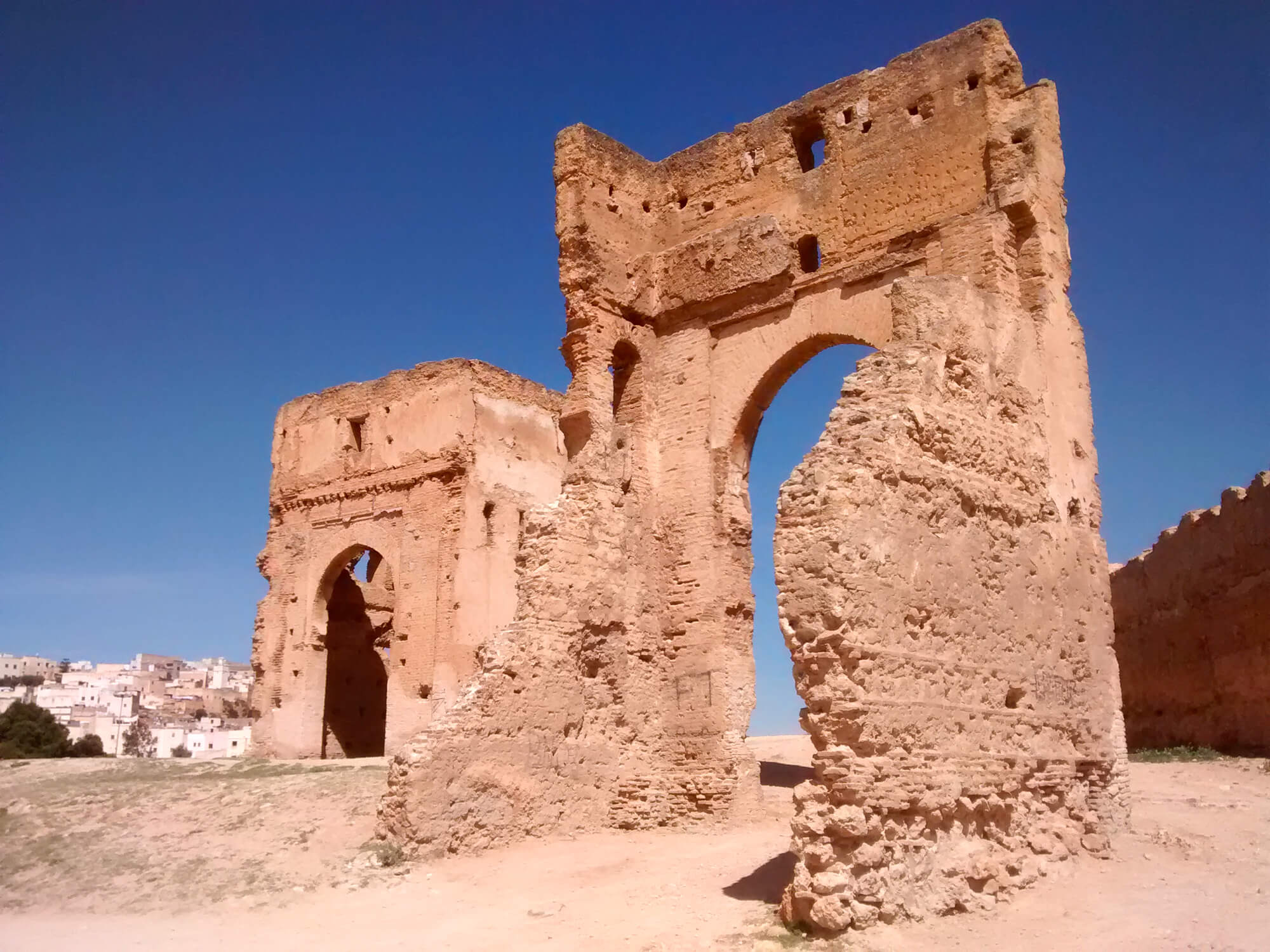 This is the first and the largest Jewish neighborhood in all of Morocco. The Mellah was a segregated area established to safeguard the growing Jewish population from the Muslims. Strolling around the neighborhoods the architectural features like large, wooden balconies and facades decorated with wrought iron provide an interesting look into Morocco’s Jewish heritage and history. The Jewish cemetery is a whitewashed wonder composed of undulating forms amidst the cityscape. The Mellah is an abandoned memory since all the residents relocated to other cities or moved abroad. Pop into the Danan Synagogue to admire its remarkable interior influenced by Moroccan and Islamic design. Gorgeous, wooden doors and ceilings set off by stunning tiles and stucco with authentic fixtures like oil lamps and wooden benches.  This synagogue is one of the few remaining in Morocco and is an important religious, historical and cultural preservation of Jewish heritage. 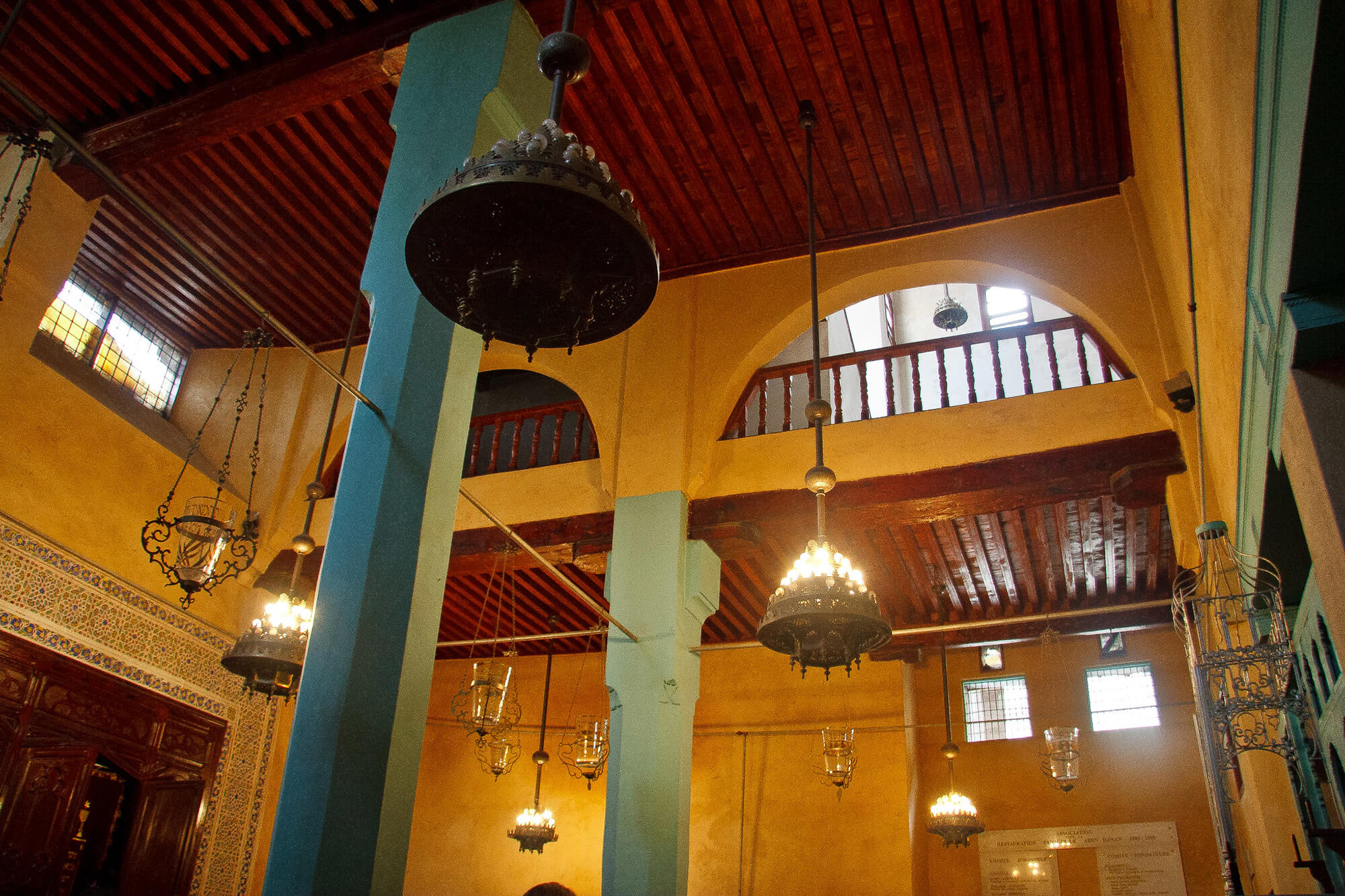 Fez goes beyond just being a city, it’s an authentic experience and one definitely not to be missed. With so much living history, why not be part of it? 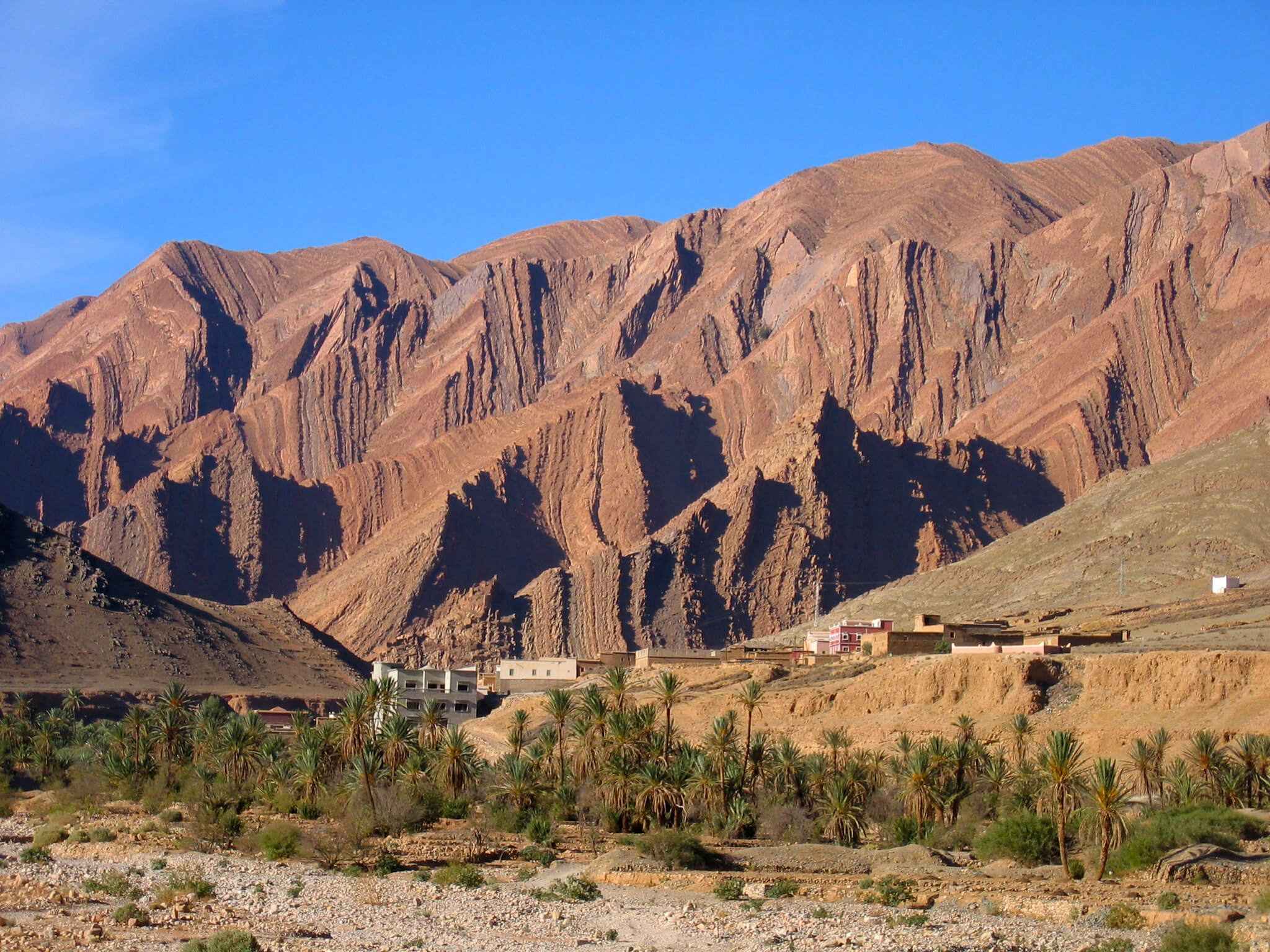 Hiking and Trekking Around Morocco 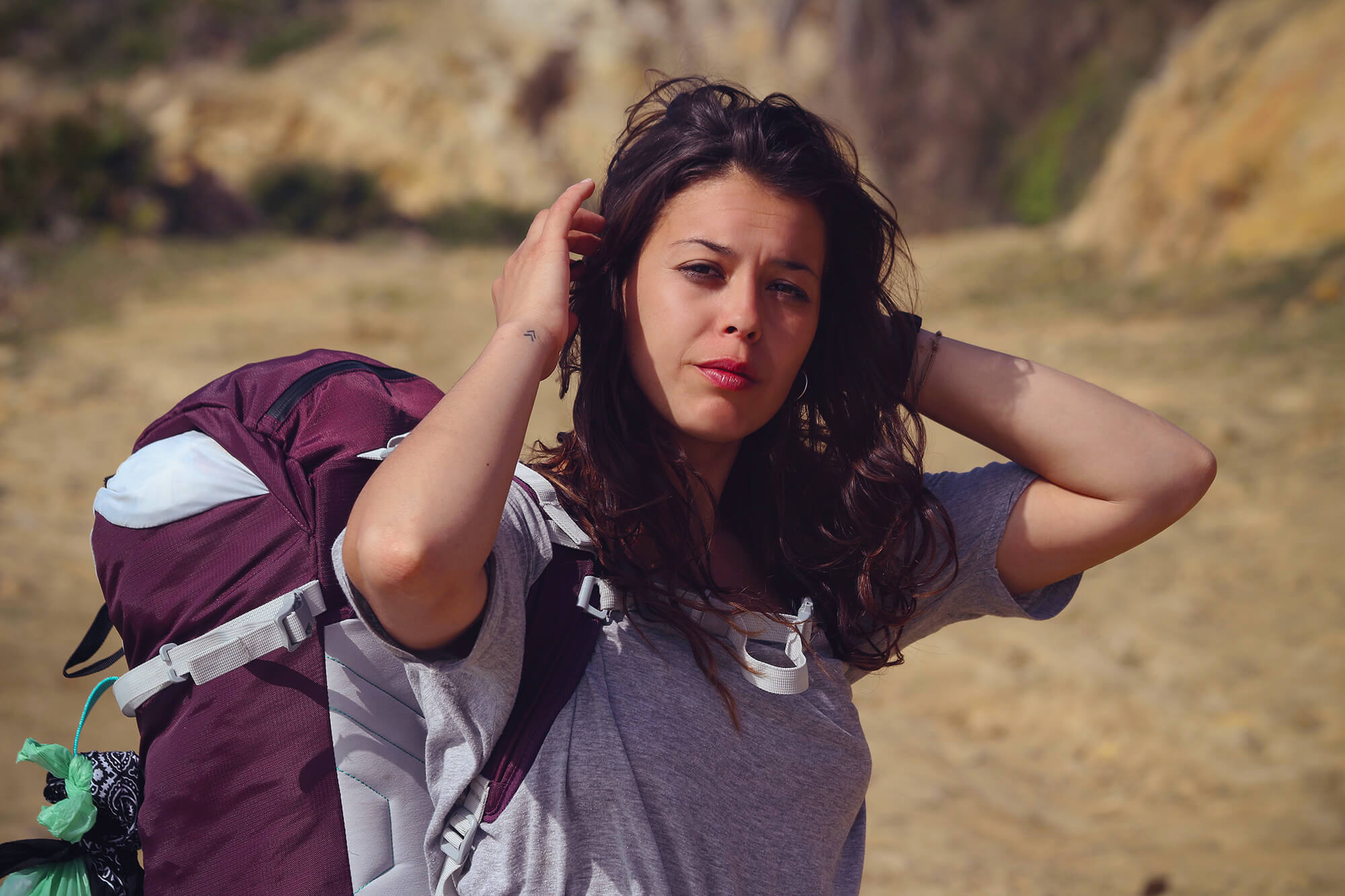 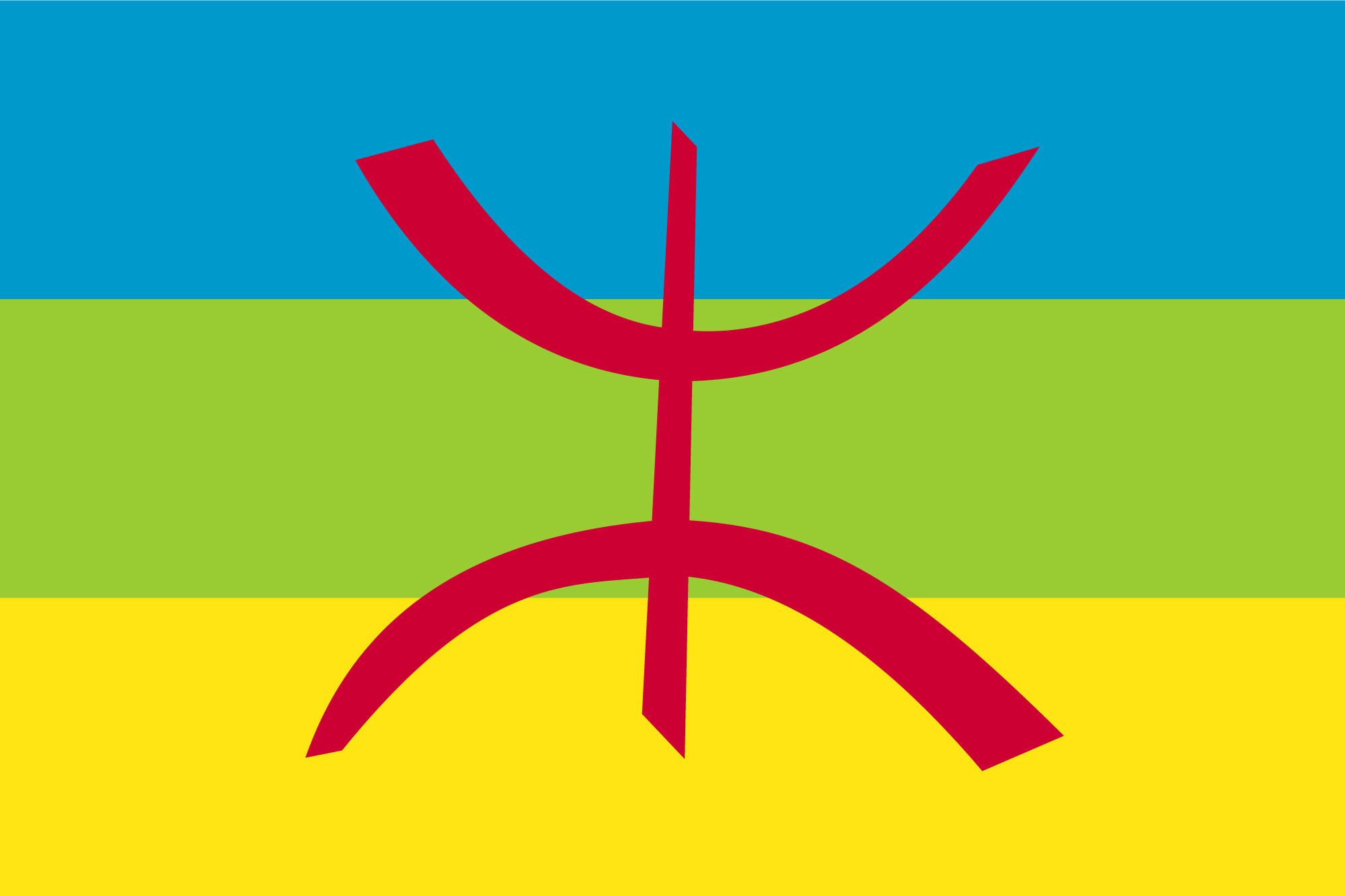 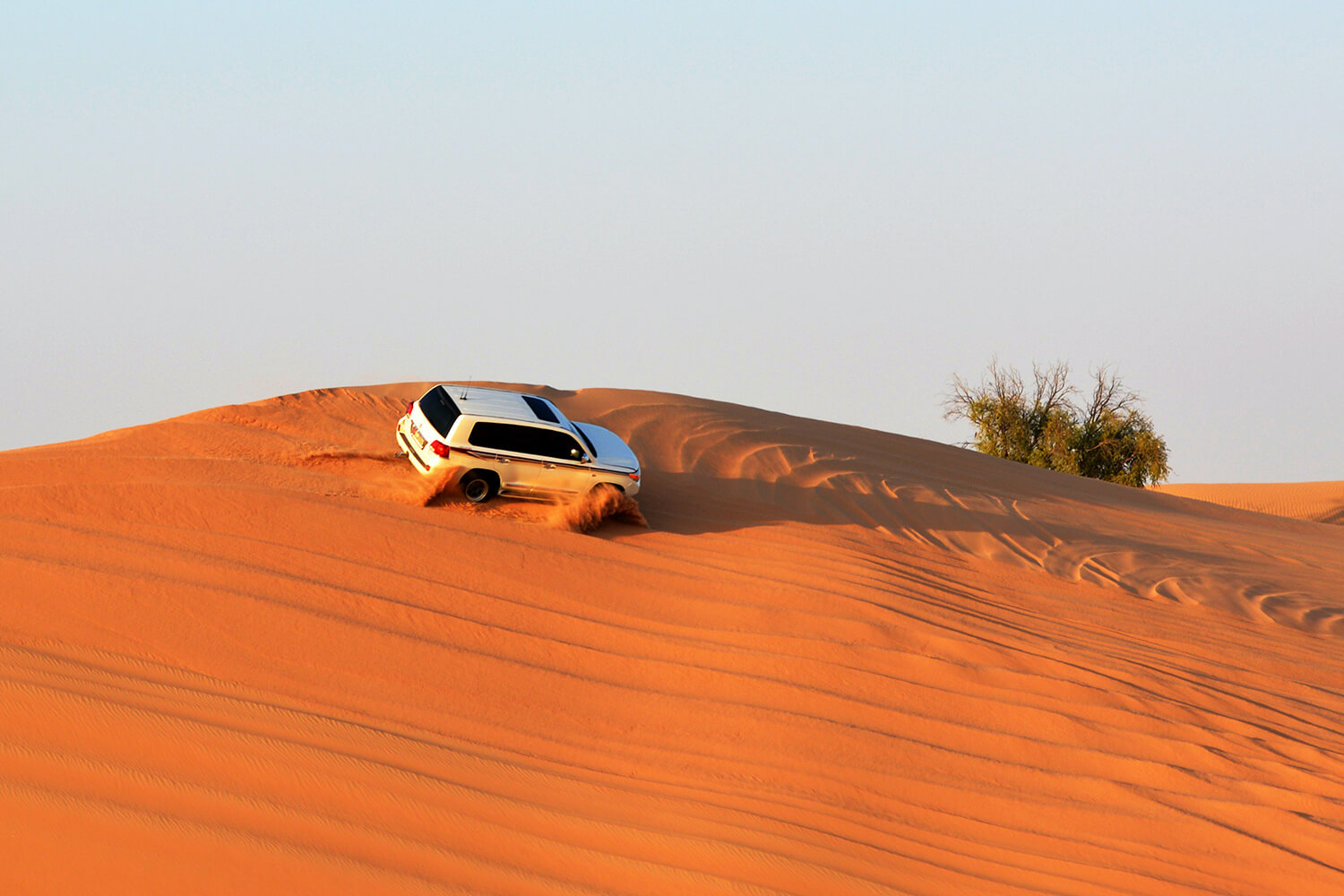 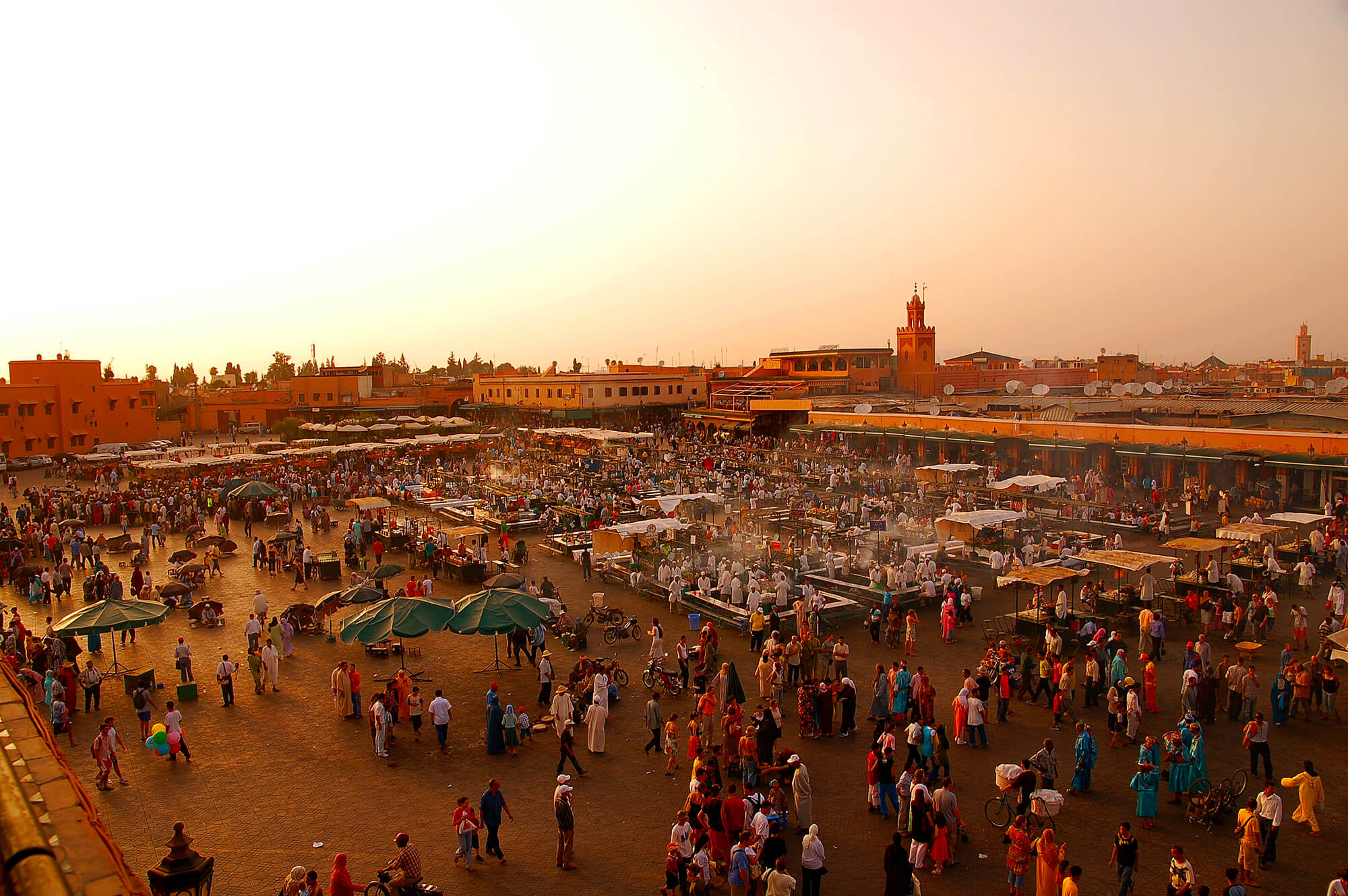 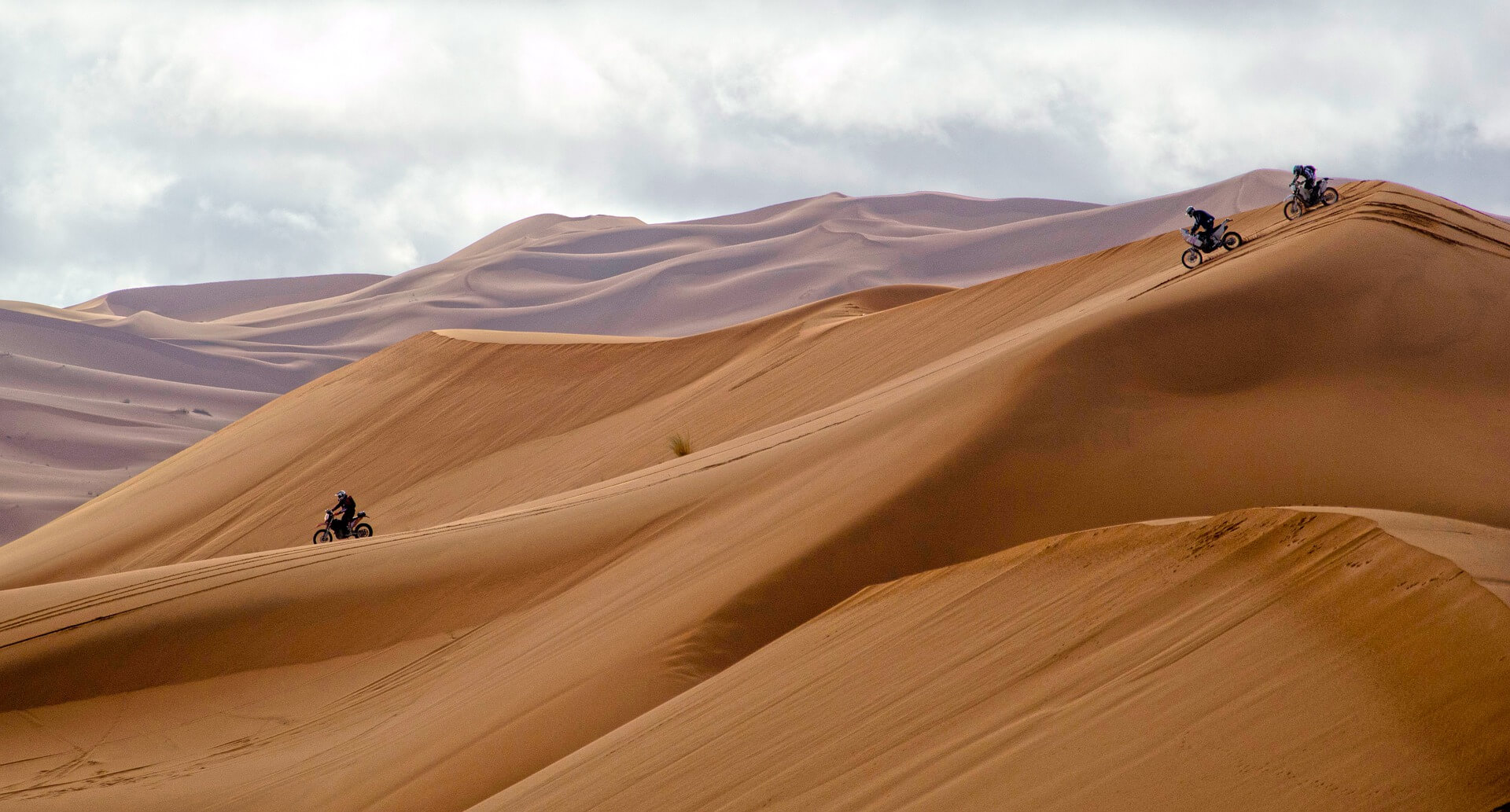 Top 10 Things To Do in Morocco